Our friend Marcin @mailopl from Poland sent us this amazing tutorial and introduction to Phalcon. Enjoy it!

This tutorial was going to be published on net.tutsplus.com but that process took more than 2 months and finally due to no response I decided to publish it on Phalcon’s blog.

In this tutorial I’ll explain what Phalcon framework is, how to install, configure and use it. I will also walk you through a process of creating very simple blog system.

In the following tutorial I am going to assume that you are familiar with:

What is Phalcon - MVC in C

Phalcon is a very recent framework on the market developed by the group of enthusiastic developers. In contrast to traditional frameworks which are written in PHP - Phalcon is a C extension to PHP interpreter itself. It means that its code doesn’t have to be interpreted on every request by PHP - it’s loaded only once, when server is booted (restarted) or reloaded.

Phalcon is also a full stack framework, which means you just need a minimal amount of code to take advantage of available components, which cover many typical use cases. There is nothing stopping you from using only certain Phalcon’s components (classes) on their own, for example if you just need Phalcon’s Cache component, you can use it in any application written in either pure PHP or using a framework.

Following image demonstrates message flow during typical request when employing MVC pattern, which is the preferred way to develop Phalcon applications. I won’t go into details describing this scheme. 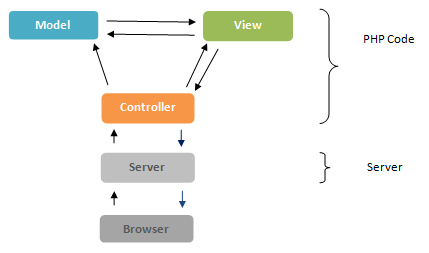 Bear in mind, that the goal of this minimal overhead benchmark is not to start another “benchmark” war. It demonstrates “base level” of performance that each framework provides and shows the difference between compiled and interpreted code.

You can squeeze more performance from PHP frameworks by tuning and picking them apart, but it requires time, effort and (more often than not) advanced skills.

Phalcon is the first PHP framework to implement a ORM in pure C. The consequence of this fact is improved performance, when compared to typical ORMs.

Since ORM is a key component of so many applications and is used so extensively, any positive changes to performance have a noticeable effect.

In short, Phalcon’s ORM allows you to do things like:

Find all users and first user with active state:

Count users and the user posts:

It is not uncommon (and quite convenient) to directly query your models inside views:

Phalcon developer tools allow you to generate boilerplate code and jump straight to implementation of your application’s logic.

They can generate any element of MVC triad separately – model, view or controller, or create scaffolding (complete code for managing records in the database) which is very efficient way to have running prototype.

They can also generate skeleton of your project, or even employ twitter bootstrap for nice looking prototypes. If you are not a command line ninja, you can use web interface (both console tools and their web counterparts are provided).

You may think that since Phalcon is a C framework, it’s not possible to provide code completion for your favorite IDE.

Luckily, that’s not the case. Code completion is handled the same way as it is for PHP functions, using stub files.

So far you’ve learned that Phalcon brings performance, convenient migrations and easy to use developer tools. Now let us give it a go, and write some “real” application using Phalcon. In the second part I’m going to walk through a process of creating a simple web application – blog.