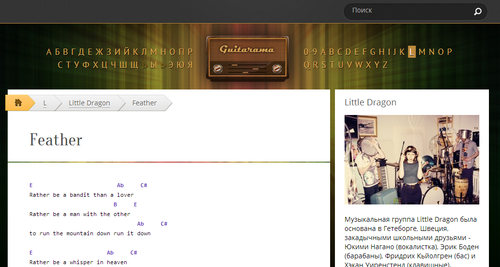 Yet another success story from our community member Michael (Xpundel).

As I wrote in comments to your post, I have a project, built on Phalcon framework.

It’s a Guitarama (http://guitarama.ru) - guitars tabs and chords catalog. The site is aimed towards Russian audience, and uses the Russian language, but I hope, there will be no problem to understand most of pages.

The site was re-launched using Phalcon at the beginning of January, 2013 and has since shown steady attendance growth. The Google stats can be found here.

The site use Twig as the template engine (historical reasons), but I recently realized that the speed of Twig does not suit the site, in the near future I plan to replace it with Volt.

There are still a lot of optimizations to do, and work on the project is constantly in process.

Once again, thank you for a great framework and all what you are doing :)

NOTE: The site is running on a server with a P4 processor @3GHz and 4Gb RAM

If you have success cases with Phalcon, let us know so we can review them and share them with the community on our blog. :)